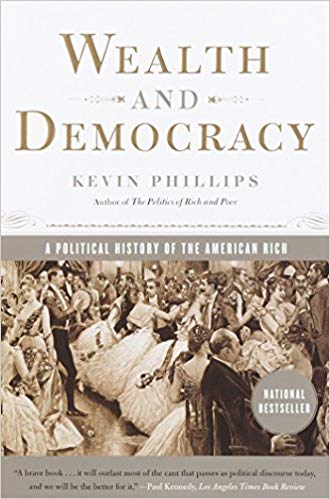 In a country where it’s more important to get out to buy a bigger SUV than it is to get out to vote, it may not be surprising that wealth rules in the land of democracy. People participate even less in politics today than they did in the 1950s, principally because most of us exile ourselves to inward-looking suburban islands and gated communities, too dispersed from each other and the problems of (what’s left of) our communities — which we learn about only through the distorted “if it bleeds it leads” local TV news. (I digressed on the decline of community that accompanied the rise of suburbia in my review of Suburban Nation.)

Wealth and Democracy What has wealth to do with democracy, anyway? Everything and nothing, as political and economic commentator Kevin Phillips points out in his incisive and devastating Wealth and Democracy. As the author says in his Preface, this would have been a very different book if it had been written in 1999, before the tech stock collapse and 9/11, rather than in 2002. In ten data-stuffed chapters plus an Afterword, Phillips supports his thesis, poetically summarized by the Goldsmith quote above, that in the modern U.S., laissez-faire “is a pretense. Government power and preferment have been used by the rich, not shunned. As wealth concentration grows, especially near the crest of a drawn-out boom, so has upper-bracket control of politics and its ability to shape its own preferment.” In the next 474 pages, Phillips goes on to cover the “political and economic history of U.S. wealth, the U.S. record of speculative finance, the Anglo-Saxon proclivity for technology manias, the overlap between watershed technological innovation and economic inequality, and the connections between wealth concentration and the corruption of politics, government, and public policy.”

A Gilded Age Ball
The party before the hangover:
The financial élites of Spain, Holland and England “partied like it’s 1999” on the eve of their declines. Phillips lists the symptoms before the slides, all of which infect the U.S. today.Wealth and Democracy is not a Socialist critique of Capitalism, but rather a Capitalist critique of excess. Phillips seems more in love with democracy than he is in awe of the invisible hand of the marketplace. As he pointed out in a November 13 interview, unregulated Capitalism inevitably leads to abuse of the system. What he takes pains to point out in his book, however, is that this fact is not only not new, the world has seen its pattern followed at least three times before.

The tilting of the US economy from production to finance as a source of wealth will spell the end of our economic dominance — just as it spelled the end of the Spanish (1530-1588), Dutch (1600-1702), and British (1815-1914) economic dominance. We’re already the world’s largest debtor nation. We’ve had a good run from 1945 to the tech bubble bust in 2001. What happens when our creditors call in their loans?

My particular favorites in Wealth and Democracy are Chapter 4, from which I drew for the symptoms of decline, and Part III, about how “American wealth nourished itself on government influence and power — and vice versa.” In the four chapters comprising Part II, Phillips explains that corporate socialism has been popular since, oh, 1787. That’s when the first Constitutional Convention went on record encouraging industry and “mechanics,” promoting fisheries, forges, factories and new technologies. Why do you think patent protection was written into the Constitution?

Kevin Phillips
Kevin Philips
A 30-year veteran of political and economic commentary, Phillips is the author of The Politics of Rich and Poor (1990) and a commentator on National Public Radio. Federal land grants and tariff suspensions on iron subsidized several private fortunes for railroad entrepreneurs: Vanderbilt, Gould, Sage, Harriman, Hill and Astor (who bribed his way to a fur fortune and profited from the state-financed Erie Canal). That of course required steel, which Carnegie, Frick and Phipps supplied. And oil, which JD Rockefeller (the first billionaire), W Rockefeller, Payne, Rogers, Flagler and Harkness supplied. Of course, financing all this speculation and industrial expansion were the moneylenders: JP Morgan, A Mellon, R Mellon, Green, Baker, Stillman and Schiff. And government granting of exclusive franchises only cemented the relationship between state power and private fortune.

Eli Whitney was one of the first federal contractors. Samuel Colt profited out of gunmaking during the Civil War. And industry still has their hands out for those fat government contracts. That’s how the major fortunes were made in this country. War is always good for business, and for war profiteers, dating back to the Revolution and the Civil War, but continuing through WW I and WW II, on through Korea and Vietnam (technically, the last two were “police actions”). Hey, maybe it’s not too late for me to invest in the US-Iraq War?

Government subsidy of pharmaceutical research (from penicillin in WW II to 2/3 of all government biomed spending by 1965, with nothing for the public in return), telecommunications ($90 billion spectrum giveaways, with nothing for the public in return), and the development of the Internet (a Defense Department project) are only the most recent fortune-builders… for the private sector. And that doesn’t even count the state and local governments subsidizing public works through private contractors — especially stadiums for millionaires, like the ones in my hometown of Baltimore.

If there is a cautionary tale in Wealth and Democracy, it is that a U.S. government “concerned with protecting wealth may do so at the expense of democratic procedures and may try to blame terrorism rather than flawed policy for hard times.” As we enter the second dip of a W-dip recession, Wealth and Democracy sounds like a book for our time.
Wealth and Democracy: A Political History of the American Rich by Kevin Phillips, 2002. 474pp, index, bibliography, notes. New York: Broadway Books (Random House). ISBN 0-7679-0533-4