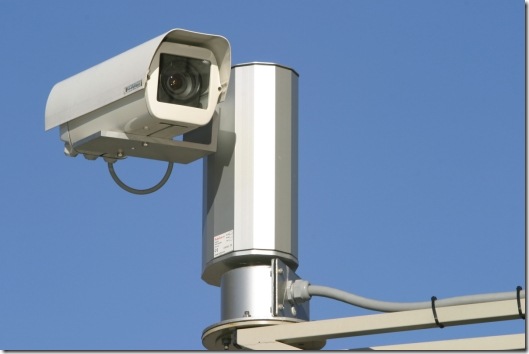 Maybe it’s time for a constitutional convention — for the purpose of repealing the Bill of Rights once and for all, not piecemeal, as I’ve seen in recent months. Even before September 11, and the subsequent USA Patriot Repeal of Civil Rights Act, legislators have been carving up the Constitution and the very idea of justice. Consider:

“Congress shall make no law… abridging…
the right of the people peaceably to assemble….”
and

“In all criminal prosecutions, the accused shall enjoy the right…
to be confronted with the witnesses against him.”

For at least the past three years I’ve been hearing about this outrage. The most recent comment I read, in the December 6 Washington Post, brings it to mind again. The premise of red-light cameras is to catch red-light runners in the act, on film, as they violate the traffic law and endanger other drivers. In theory, taking a picture of a driver violating the law is pretty solid proof that they are guilty — and the police mail the violator a ticket. There is a high degree of compliance (most tickets are paid, rather than disputed) and intersections where red-light cameras, or what I like to call “camera cops” (because they are used in lieu of a human witness), are installed reportedly experience a marked decrease in red-light runners.
Sounds pretty good, doesn’t it? But I am unimpressed that two-thirds of Americans support camera cops. A majority of Americans will support just about any restriction on someone else?s rights. I, and some others, see four real problems in this traffic enforcement method. I call them the design objection, the privacy objection, the rights objection, and the profit objection.

Camera cops do nothing to reduce the underlying problem of why people feel the need to run red lights. Red lights are a poor substitute for better highway design. Traffic lights must be coordinated to expedite traffic flow rather than slow it to gridlock. A driver who passes through intersections with ill-timed lights naturally speeds up to catch the next light. Why needlessly frustrate drivers? A smooth traffic flow will maintain calm drivers and orderly intersections, thus markedly reducing the incentive to run red lights. If the purpose of camera cops is safety, isn’t this a better way to achieve it than the punitive one?

THE PRIVACY OBJECTION
The privacy of individuals in their cars is violated by camera cops. It’s also called the “mistress defense,” and although I don’t condone the practice (mistresses, that is), I understand the objection. Cameras don’t discriminate: they photograph whatever they’re pointed at, including (mostly) men who are where they should not be and with someone they should not be with.

A small price to pay, you say? Perhaps so. OK, so privacy is already invaded in everyday life: just look at all the cameras that watch us in banks, in stores, and in a lot of corporate buildings in our business centers. I’ve seen them, but I’ve also seen what they have in common: they’re in private hands; they are not part of a government-controlled bureaucracy and their controllers don’t have the power of arrest and trial at their disposal. I don’t like having cameras watch me, but I understand theft-reduction concerns in private business. And I have a choice about which businesses I will patronize. However the road system is a government monopoly so I have no choice in what roads I use. But let’s look at my next objection.

A camera is not human; a camera is a machine. That is obvious, you might say, but here is the real problem with that: camera cops are being used in lieu of a human witness — a witness who can be called to testify and be cross-examined. You can’t cross examine a machine. A machine has no rights; a human must. If we elevate a machine to the level of a human, by instilling in it the capacity convict, you are debasing the humanity of the human. Human beings have a Sixth Amendment right to face an accuser. Just who is doing the accusing when the only witness is a contraption of metal and glass? Is convenience a sufficient reason to discard a constitutional right?

In fact, opportunistic contractors and politicians are promoting exactly that: the convenience of red-light cameras. The more cameras we have watching dangerous intersections, the more cops we free up to pursue other crimes. You just can’t have a cop at every intersection, they say, because it isn’t cost-effective. While this is true, it is also true that most municipalities already know which intersections are the most dangerous ones. It is, indeed, part of the police department’s job to allocate resources judiciously. In fact, camera cops are not installed at only the most dangerous intersections: they are installed at the intersections with the highest volume of traffic. Why do you think that is? The reason brings me to my final issue with camera cops.

Tickets issued on the basis of camera cop “evidence” are usually paid without demur, as I mentioned above. How can you argue with a machine? Here’s how: by pointing out that traffic enforcement should not be a profit center. Camera cops are marketed to eager municipalities by hungry contractors who argue that it’s a win-win situation. The contractor makes about 30%-50% of each ticket paid; the municipality gets the ticket revenue — and people become a little more careful in high-volume intersections. And don’t think for a minute that there isn’t a profit motive for insurance companies: they can charge a higher rate if you have tickets on your driving record! I think it’s wonderful that people are encouraged to be better behaved behind the wheel, but isn’t it just a little unseemly for law enforcement to be contracted out?

Given my four reasons — the design objection, the privacy objection, the rights objection, and the profit objection — there is ample cause to consider camera cops a vice, whatever their safety virtues. I don’t think I would even object to a police officer taking pictures at notoriously dangerous intersections (as opposed to the merely profitable ones), as long as he or she remains a human witness who can be subpoenaed to testify in support of what was witnessed. That way, the camera is a servant, not a master. No one wants lawbreakers to get away with traffic violations, especially if their misbehavior results in injury or death. But isn’t that why we have living, breathing police officers on the public payroll?

Camera cops, or red-light cameras, or radar cameras, are a cop-out. They will not prevent anyone from being killed at an intersection. Their only effect is after the fact. What we really need are red lights. In a few rear-view mirrors. Flashing from police cars.
Want to comment on this? Send me an e-mail!