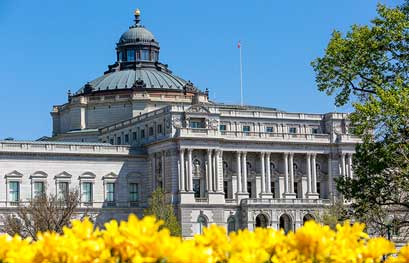 It was on this date, April 24, 1800, that the oldest federal cultural institution in the US, and the world’s largest library, was founded: the Library of Congress. Its collection of 119 million items includes materials in 460 languages — not only books but maps, monographs, dissertations, periodicals, voice and music recordings, and 14 million images — is not only a magnificent monument for modern times: the Library of Congress is the largest library ever to exist.

The recording of the sum of human knowledge for the betterment of humankind was not a high priority in the Ages of Faith in Christian Europe, or for most of the history of the Muslim East. It was never considered that humanity could be improved — the idea of human progress was a secular humanist achievement. It is therefore dishonest to crow about the great libraries of the Middle Ages (which includes the Dark Ages), and the romantic fiction of the monks preserving the classics, without telling us just how many volumes these so-called great Christian libraries comprised.

We have archeological evidence of great libraries in Assyria — an ancient kingdom centered in Iraq but encompassing most of the modern Middle East — and libraries in Egypt, dating to about 1300 BCE. The Library at Alexandria, founded in the 3rd century BCE, collected manuscripts from the entire ancient world, and was a world-class center for teaching and study, copying of documents, and a collection of over 400,000 scrolls. The collection ebbed over the years, possibly due to fire and deliberate depredation, until the whole library had vanished sometime after the murder of Hypatia by a Christian mob in 415 CE.

But look at the solidly Christian period of 500 to 1300: not a library can be found in all of Europe with more that 2,000 volumes, many of them copies of the same title. The well-worn 19th century myth that the monks of the Middle Ages preserved the classics for posterity is doubly false. Not only had there been a great Christian holocaust of books from the old Empire, but only one or two abbots, out of thousands in Europe in any century, ever set their abbots to copying anything but religious works: that was the Benedictine Rule, after all. It wasn’t entirely the monks’ fault: in the greatest abbey of the 13th century, the Abbey of St. Gall, not a single monk could read!

That largely illiterate, cloistered monks would copy and preserve Latin classics infused with an abhorrent paganism beggars belief. What modest copying that did occur in Christendom was centered in Ostrogoth lands where they hated the popes. The only library of the Middle Ages that even approached the depth and breadth of the Alexandrian was the Caliph’s library of the skeptical 10th century of Muslim Spain — at the very time Greek learning had died out in Christian Europe and the Latin classics were denounced as “Devil-inspired.”

The 18th century Enlightenment, which Immanuel Kant aptly described as “man’s emergence from his self-incurred immaturity,” brought real scholarship and dissemination of knowledge to large numbers of people. It is also what made all great libraries possible — including the one nurtured with a gift from freethinker Thomas Jefferson of more books than any library of the Middle Ages — the Library of Congress, founded on this date in 1800.